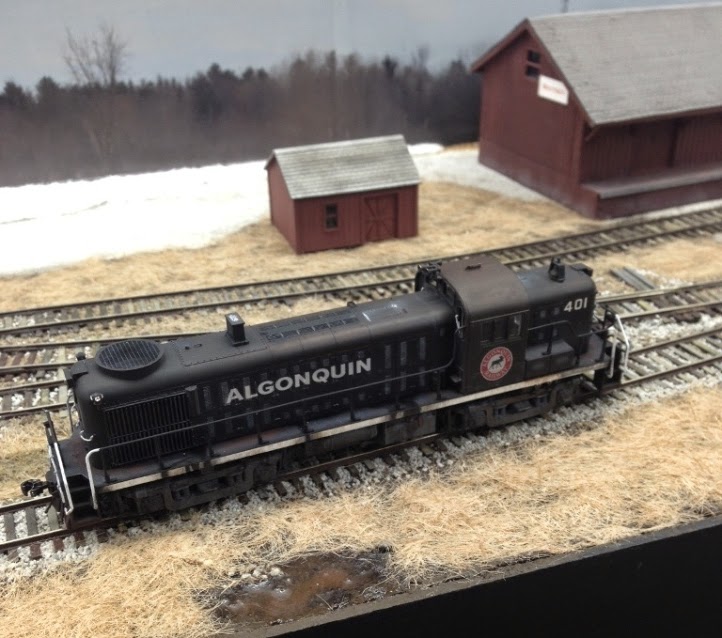 I just finished up the newest addition to the Algonquin Loco fleet.  RS3 #401 started out as a factory decorated Atlas model featuring the companies 40th Anniversary theme.    I picked up the model at the Springfield show.  I am pretty sure the vendor did a happy dance after I left his booth, he couldn't believe someone wanted it, let alone pay for it!.  After a few hours in alcohol the gold paint was gone.  I added and upgraded many detail parts to this model.  Such as:

I also installed a Soundtraxx Tsunami Decoder.  This turned out to be an easy install, as the board just drops in.  I had to mill the two weights above the trucks to acomodate the capacitor and speaker.  More details on the installation can be found here.

I painted the model with Tru-Color paint.  I used weathered black.  This was great paint to spray and went on very smooth.  But is sure smells, as it is solvent based.  I sprayed it in my vented spray booth.  The Algonquin decals were custom made for me by Bill Brillinger who I met on the MRH forum. The numbers are from Microscale sets.

The model is weathered with oils, AK streaking effects, Pan Pastels and Bragdon Chalks.  It was fun making it look old and beet up.  I painted one of the truck bearings yellow to suggest it had been recently replaced.

One thing that gave me trouble on this project was the white frame stripe.  I first used frame stripes from a microscale set but the kept flaking off when working on the running boards.  The running boards are separate from the many body on this Atlas model and are made from a flexible plastic.  Basically they would flex and the decal would start to crack and peel off.  I considered painting them but decided to try some Automotive stripping tape first.  I purchased a role at Canadian Tire.  I applied it and then trimmed it at lower edge of the frame.  This was easy, looks great and really sticks. 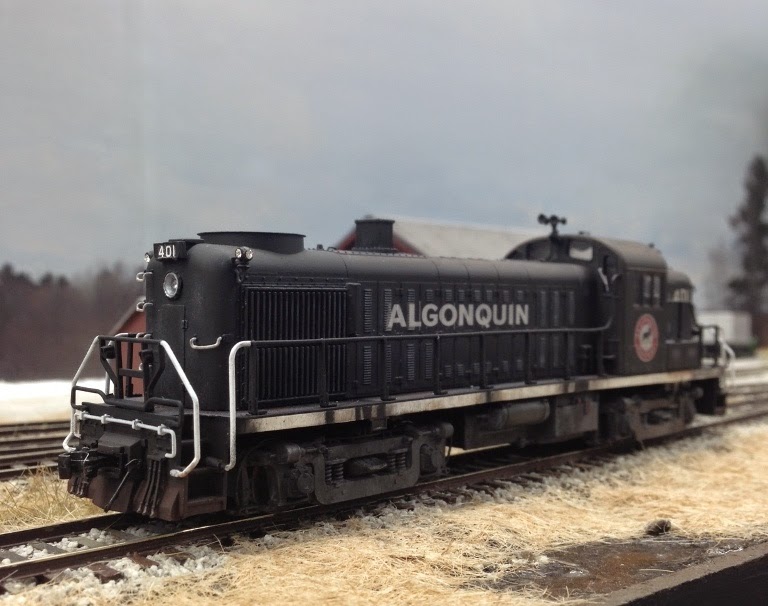 Next is to setup a Consist in Decoder Pro so it can run with AGN RS-10 502.  The dual Alco 244 prime movers should sound great together.  I still also need to install the brake chain.

Email ThisBlogThis!Share to TwitterShare to FacebookShare to Pinterest
Labels: Locomotives