Over the last few months my modelling efforts have been focussing on completing all of the projects that I started, but have yet to finish.  I managed to get everything completed, save for a coat of Dullcoat on a couple of boxcars I weathered.  I will update the blog with pictures over the next couple of weeks of these recently completed projects.  It feels great to clear the bench and start something fresh.  Going forward I will complete a project before starting something new.  Well at least thats the plan.

I decided to focus on getting the layout better prepared for operations.  Ops on the Algonquin have basically been my son and I switching a train,  in which he decides which cars will go where and we just have fun.  Occasionally my Dad or Father in law helps us with an op session and we run a train a bit more prototypically.  A couple of months ago Trevor Marshall stopped by and we ran a train with a bit of paperwork.  I whipped up a switch list and we scribbled something together that made some sense.  The layout operated ok.  We had four issues I made mental note of, in hopes to correct when I finished up all the projects in limbo.  My goal is to have the layout operate 99.9% of the time.  100% would be better but something will always come up.  To do this I will need to make note of all issues and fix them for good.

Issues I made note of, were the locomotive would stall on one of the turnouts at very slow speeds, one of the boxcars would not couple on one end,  the facia mounted control rods for the switches were tight or rough feeling and we lost complete control of the locomotive after about 40 minutes of running, but recovered when we turned the command station power on and off.

I addressed the issues as follows.

Trevor gave me a tip to try with the coupler.  Basically to polish the face of the knuckle to remove any burrs and allow it to slide into the on coming coupler.  Seams to have worked.  I will add this to my freight car maintenance check list going forward.

The control rods were a bigger issue.  When I built the bench work I decided on a 4" tall fascia to allow enough room for books on the shelf below the layout.  I use Bullfrog turnout machines from Fast Tracks, which are designed to use RC aircraft style pushrods.  The issue was when mounted the vertical distance from the control rod mounting point on the machine was right in line with the bottom of the fascia.  The RC aircraft rods can flex but not by the amount I needed in the short horizontal distance from the fascia to some of the switch machines.   I decided to not use the RC aircraft push rods,  and used a piece of music wire bent to make up the difference of where I wanted the push rods to come through the fascia and the mounting point on the switch machine.    Well the wire I used worked for a while but over time they started to bind and bend.  I needed to find a way to use the RC aircraft style pushrods.  Some of the turnouts are horizontally far enough away from the fascia so I just removed the music wire rods and replaced them with the RC rods.  For the rest I made up some fulcrums that I could mount further from the fascia such that the RC rods could flex the required vertical distance and use a music wire rod to activate the switch machine from the opposite side.  Here is a picture to clear things up. 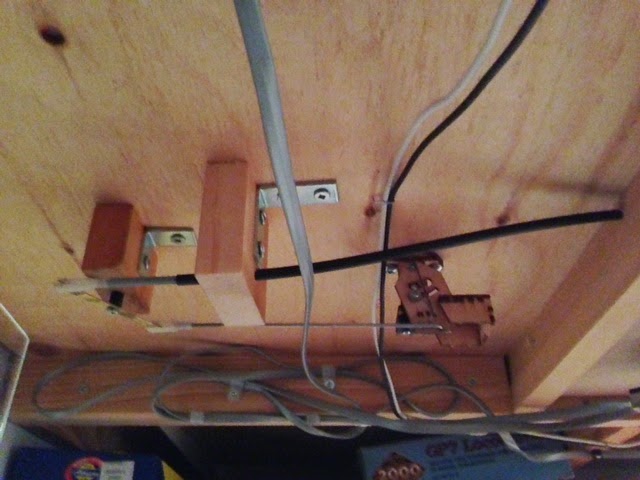 I also did some tuning on the Bull frog switch machines.  I found that the top of the pivot point on the part that moves was rubbing on the mount so I trimmed a bit off.  I also smoothed out the notches where the ball bearing runs, thus requiring less effort to throw the points.  I found that over time it was just getting harder to rotate.   So far so good,  the new rods are a big improvement and the machines are working much smoother.  I also needed some new pull knobs for the rods.  I found the perfect solution - screw on furniture floor pads.  These are plastic disks you screw to the bottom of a furniture leg and then stick a pad of felt on to protect your floor from scratches.  They cost $3 bucks and come 8 to a pack.  I simply screwed them into the push rods and stuck on the felt.  It gives a nice touch. 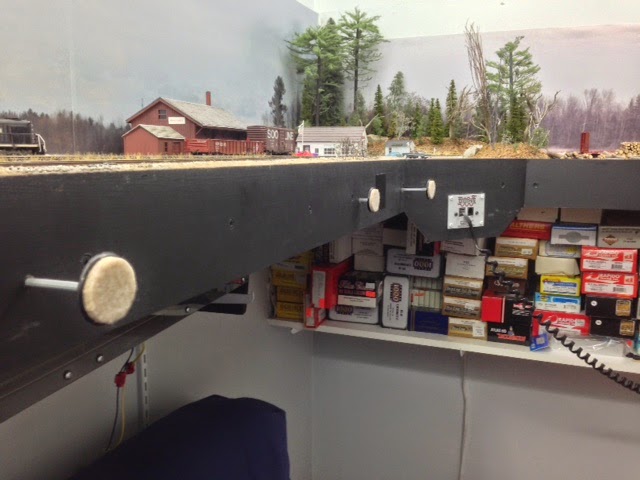 I have no idea what cause the locomotive to stop responding but it hasn't happened since,  I am going to believe it was just op session gremlins and leave it at that.

So whats next?  I have a lot of other things I need to prepare in order to have a proper operating session and will start working on them this week.  Here is the list I came up with.

1. Make a track schematic to help with planning ops.
2. Design a more formal Switch list.
3. Populate waybills for all of my freight cars and give each a tune up as I complete each waybill. This also includes researching where the loads are going and coming from.
4. Fire up decoder pro and tune all three of the Algonquin locomotives speed curves to match so I can operate them in MU if needed.
5. Clean all the track and apply graphite to help with electrical contact.
6.  Install a pull out shelf so operators have somewhere to fill out paperwork.
7.  Install way bill boxes on the fascia and the layout.
8. Build a Van for the Algonquin fleet.  (This is the most exciting job on the list for me but I am not going to start until everything else is done or I will never get to them.)

Well I can cross off #4 as I spent Sunday morning tuning the engines with Decoder Pro. 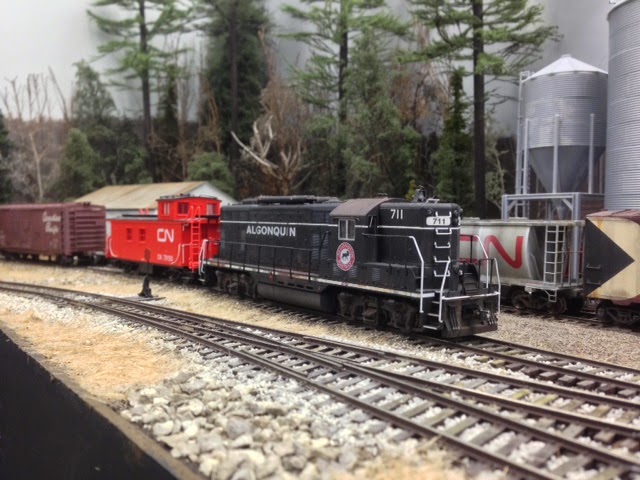 I changed the motor out for a Kato unit, shimmed the worms on the gear towers and installed a Sound Traxx Tsunami decoder along with SMD LEDs for the headlights. I detailed the engine with the standard roof mount bell of the Algonquin fleet,  along with torpedo tube air tanks as the engine features a long range fuel tank.  This was a factory painted KCS unit, in which I removed the lettering, using fine sandpaper and applied the Algonquin lettering and herald.  I detailed the trucks with sanding hoses using fine solder,  the truck side frames were replaced with more prototypical units from Athearn.
Brass MU hoses and MU stands round out the detail changes.